10 Things to Know About Honeywell HFO-1234yf 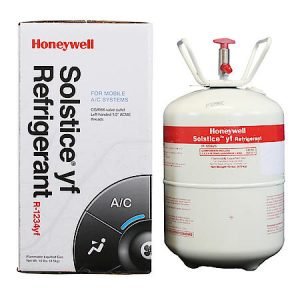 Refrigerant Depot specializes in the Honeywell HFO-1234YF product for automotive dealerships and collision shops and we currently have several products on sale with free shipping in the US!

HFO-1234yf is a refrigerant that has a different chemical composition than traditional refrigerants used in automotive air conditioning. It is considered a hydrofluoro-olefin refrigerant.

3. This product is necessary for repair shops.

4. HFO-1234yf is popular in Europe and is expanding to the United States.

Currently, Honeywell Refrigerant HFO-1234yf is most popular in Europe. Automakers started using the refrigerant in European vehicles several years ago. A law implemented in June 2011 made it necessary to use this type of refrigerant to reduce emissions and combat global warming.

5. This product helps meet the standards of CAFE regulations.

In the United States, the Corporate Average Fuel Economy (CAFE) requirements regulate emissions and give automakers valuable tax credits for meeting standards. Replacing R-134a systems with a HFO-1234yf system is one easy way for automakers to achieve this.

While HFO-1234yf is considered better for the environment, it is classified as slightly flammable. Otherwise, the two refrigerants are very similar in performance. While R134a could be put into a HFO-1234yf vehicle system, it is not advisable.

7. The 1234yf product is better for the environment.

Environmental studies show that R134a and older refrigerants contribute to global warming. The new Honeywell refrigerant reduces the level of emissions that the vehicle puts into the environment, making it preferable to governments and environmental activists.

Chevrolet, Chrysler, BMW, Dodge, Kia, Jeep, Honda, Volkswagen, and many other automakers are using this refrigerant in many of their vehicles.

This new refrigerant will be more costly than the types traditionally used in vehicles, but this is considered a small price to pay to reduce global warming. Refrigerant Depot is proud to offer deep discounts to dealerships and on large orders.

To work on vehicles that use the the new refrigerant, a repair shop needs to have a new system installed. To get started on ordering a new system for your shop, contact us today.